Dr. Cornelia Baciu is a Researcher at the Department of Political Science and Centre for Military Studies, University of Copenhagen. She specialised in international security organizations and conflict research. She is developing a research agenda that seeks to introduce the notion of ‘order’ understood as the interplay and governance processes between state institutions, everyday power relations, and the international organization. She also specialized in meta-science, where she focuses on epistemological pluralism and research methods. Cornelia Baciu is Deputy Convener of the BISA Foreign Policy Working Group and founding Director of the Research Network 'European Security and Strategy'.

ERGOMAS Conference"Dynamic armed forces in changing societies: Challenges for research in and on the military" 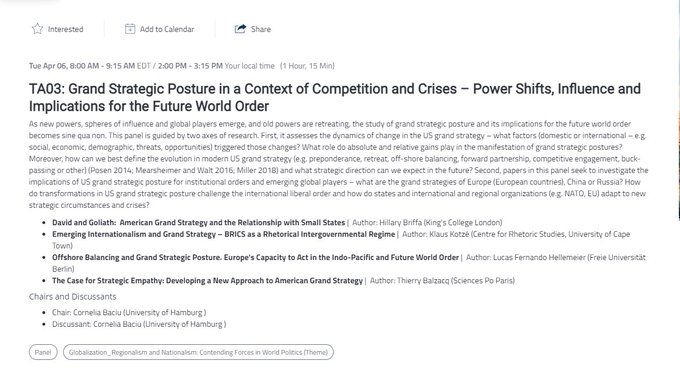 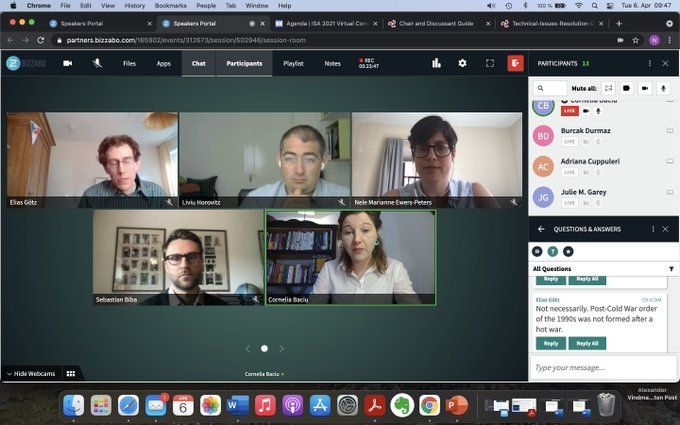 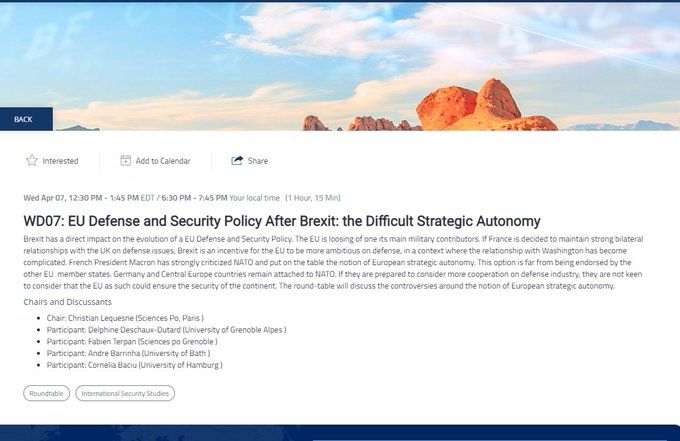 The full programme and on-demand sessions can be accessed here.

Global/Local Crises as a Challenge for Peace and Conflict Research

Paper presented: "Geopolitical Dilemmas in Security IOs. The Case of the EU and NATO" (co-authored with Dominika Kunertova, ETH Zürich).

Democracy and its Limits: The United States in Perspective

Paper presented: "A City Upon A Hill: Paradoxes of American Exceptionalism and Restraint From A Neo-Classical Realism Perspective".

At GLOBSEC 2020 Digital Stage I asked Katarina Mathernova (Deputy Director General at DG Neighbourhood and Enlargement Negotiations), Majlinda Bregu (Secretary General of the Regional Cooperation Council), Roland Freudenstein (Policy Director, Martens Centre) and Jakub Wisniewski (Director of the Department of Foreign Policy Strategy, Polish Ministry of Foreign Affairs) where do they see the EU in 2050 -- being a great power, a small power, no power or a hegemon?  . 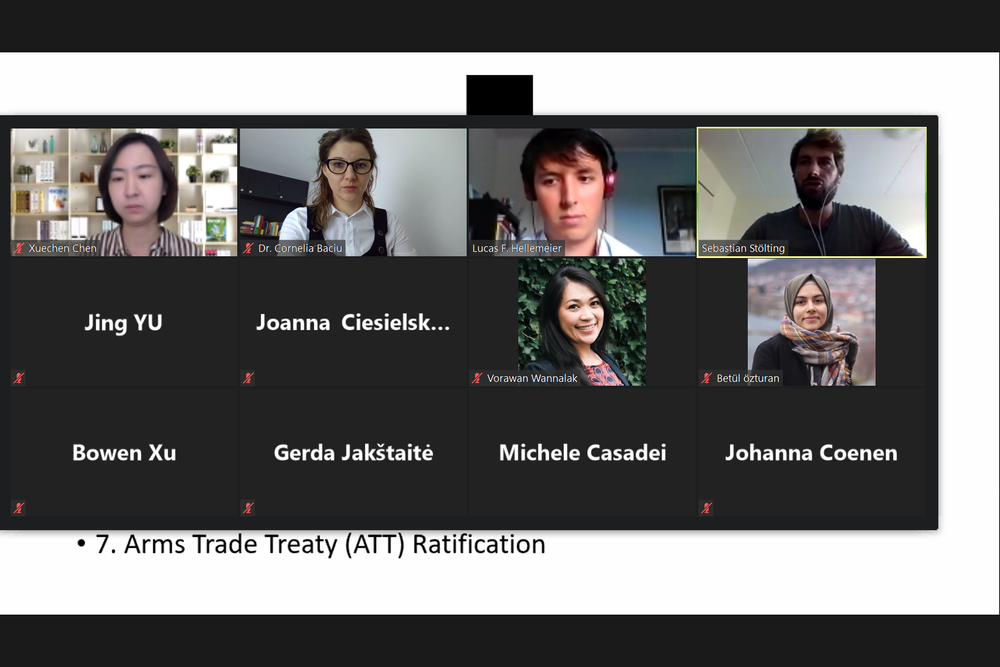 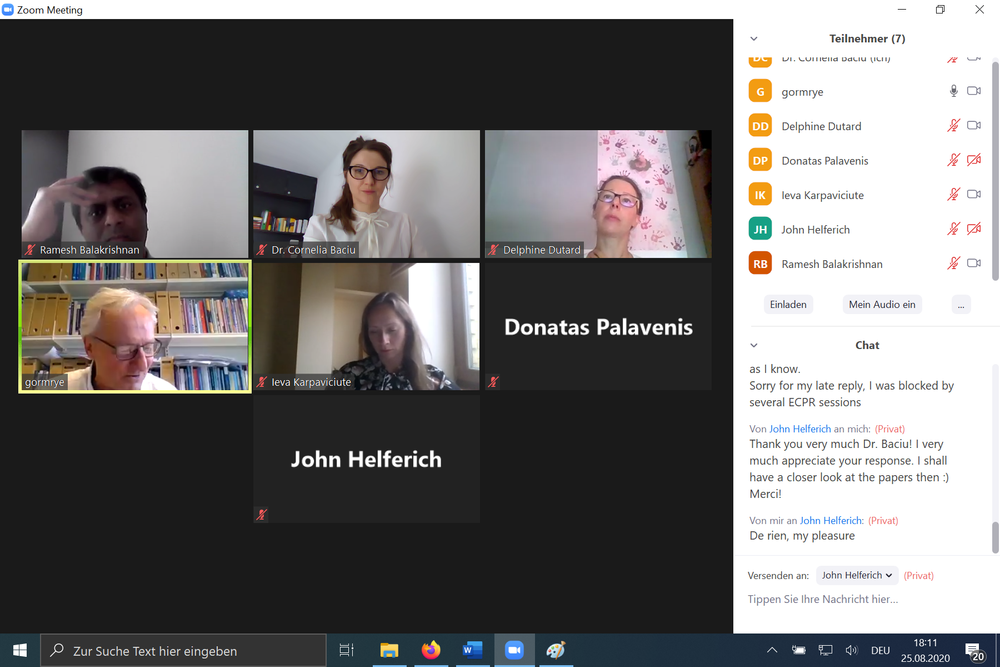 This Section sought to examine internal and external challenges to CSDP/CFSP and the EU as a security actor. In response to non-traditional types of security threats, crises and challenges – such as Brexit, US strategy of retreat, Russia’s assertive foreign policy, China as rising power, hybrid, cyber and climate risks, lack of a joint strategic culture in Europe or systemic instability, the EU underwent several processes of change and transformation.

The NATO Engages Conference took place in advance to the High-Level Leaders Meeting 2019, and I participated at the discussions as an academic observer. The text of the London Declaration of 04 December 2019 is available here.

In the context of an evolving international security order, with diminishing capacity of states and international organisations to predict or control crises and insecurity, this workshop explores the evolution of EU-NATO relations as well as the perspectives for a grand strategy for Europe to advance resilience and an international agenda underpinned by a ‘positive’ understanding of peace.

Book Launch "What Does Brexit Mean for European Security and Transatlantic Relations?"

This discussion focused on three major thematic axes. First, it explained why Brexit presents a security challenge to Ireland and the EU as it undermines the basis of the Northern Ireland peace process and Good Friday Agreement, creating the possibility that there will again be a closed border on the island of Ireland. Second, future UK relations with the US, NATO and European partners were evaluated more in-depth. While a ‘special relationship’ between the EU and the UK in the form of a special FPA seems less likely, there may be some possibilities to negotiate a special dialogue framework after Brexit. This however will largely depend on the EU27’s political preferences. Third, the speakers concluded by assessing future challenges and sources of instability in the European and transatlantic security order, associated with the Brexit process.

This book is significant because it fills a crucial scientific gap by examining key challenges as well as the impact of the Brexit a process on primary strategic aspects of peace, security and defence cooperation. The book entails contributions from internationally known researchers from London School of Economics, Hertie School of Governance in Berlin, European University Institute in Florence, Institute for European Studies in Brussels and University of Grenoble, inter alia, and contributes to a better understanding and management of anticipated challenges and sources of instability in European and international security, associated with the Brexit process.

“Science is responsible for the progress of the society” claimed the German journalist Carl von Ossietzky, laureate of the Nobel Peace Prize in 1935; and teaching can be responsible for the production of knowledge and science, I would add. In a rapidly changing international environment in the 21st century, teaching and academic research can have a stabilising impact on societies by enabling the creation of a body of knowledge and scientific outputs which can help us to understand, explain or predict crises or instability. But how can teaching at postgraduate level be positively intertwined with completing the PhD dissertation and writing journal articles and/or books?

The CSDP is a domain in which some argue differentiated integration might work better. This is because states' national strategies are driven by different threat perceptions, strategic environments, capabilities and strategic interests. My research suggests that differentiated integration in the form of a role-player model in the CSDP could enhance strategic knowledge production and capability development. Security and defence collaborative regimes such as the CSDP can have an empowering effect on member states. However, an unintended consequence of the role-player model could be a "Europe à la carte" in which members would only support the policies in which they see a benefit for their own national interests.

The Future of European Security and Transatlantic Relations

The Expert Scenario Workshop was organised by myself during my short-term YERUN Visiting Fellow at the Centre for War Studies, SDU. The workshop was attended by senior researchers from the University of Southern Denmark and University and Copenhagen. Three scenarios were counterfactually discussed:

• The Future of Transatlantic Relations – Scenario: US withdraws from NATO

• EU as a Global Actor: Between Power Equilibrium and a Resilient International Security Strategy – Scenario: EU announces a new grand strategy post-Brexit in response to new type of crises.

This was part of the three-day seminar on "European Security: Old Trends and New Realities", organised by the Robert Schumann Centre and the Global Governance Programme at the European Union Institute, Florence, Italy. The seminar encompassed lectures and simulations.

The Interplay Between Exogenous and Endogenous Sources of Military Transformation

This paper investigated the causal mechanism between exogenous and endogenous sources of institutional change and transformation of security and defence institutions in insecure states, and was part of the Panel "Civil-Military Relations and Change in Security Institutions".

Panel Chair: The Future of European Security and Defence Post-Brexit

This Panel aimed at generating an academic discussion on security and defence transformation in Europe post-Brexit. My paper proposed a conceptual model encompassing theoretical proportions from regime and game theory to test the level of strategic convergence between EU and UK and make predictions on the potential for future cooperation. I was also a Discussant in the Panel "Perspectives on Europe's Security and Defence Policy", details here.

Security and Defence Cooperation in the 21st Century: What Issues, What Models?

This conference attempted to conceptualize modern forms of cooperation in the matter of security and defence, such as PESCO, EU-NATO framework and bilateral agreements. My paper proposed the theory of international /transnational collaborative security and defence regimes to conceptualize new forms of security cooperation. This theory was empirically tested using Germany and Romania as case studies.

Multilateralism and Interdependence: Prospects and Challenges

This conference discussed the challenges facing multilateral institutions and the processes of cooperation between states. My paper presented a new methodology to analyse the transformation of security, defence and foreign policy applying Ireland as a case study.

The conference provided a platform for discussion on the changing role of the military in the contemporary world order. The presented papers focused in particular on the role of armed forces in democratisation and security.